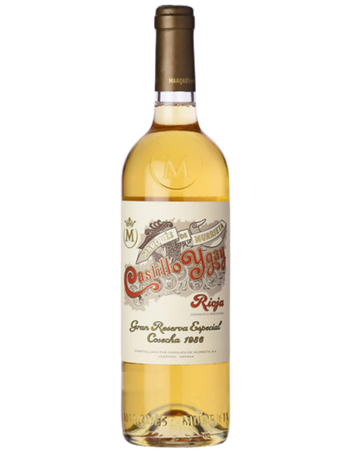 WA100: I have been terribly excited about this wine since I first learned that (part of) it was still in cement waiting to be bottled in September 2013. I consider the rare white Castillo Ygay one of the greatest white wines ever produced in Spain, and the 1986 Castillo Ygay Blanco Gran Reserva Especial is a great addition to the portfolio of the winery--an historic wine that is coming back to life. I did a vertical tasting of many of the old, historic vintages of this wine, and they are included in a separate article in this very same issue. This 1986 had seen the light as a limited early release bottled in 1992 and sold around 1995, and some bottles might still be found in the market. But most of it remained unbottled and was kept at the winery, where it stayed in oak for 21 years, followed by some six years in cement vats until it was bottled. It has 13.5% alcohol, an extremely low pH of 2.98 and 6.75 grams of acidity (tartaric). It has a very subtle nose and it's a bit shy, a little closed at first. It was only bottled one and a half years ago, and it's not crazy to say that the wine is showing extremely young. The wine shows more open the day after, when it has developed some nuances of mushrooms and verbena tea. This is mostly Viura with perhaps a pinch of Malvasía Riojana (aka Alarije). The palate is both powerful and elegant, with superb acidity and great length, with volume and sharpness, with a mineral, umami-driven finish. It fills your mouth, tickles your taste buds and makes you salivate. There is nothing negative about the wine; there is no excess oak, nothing blurry, nothing to improve... perhaps the bottle used! I think this is a perfect wine. It seems to be getting younger and younger with time in the glass; it seems to be getting more focused and sharper, and I have no doubt the wine will evolve and last for a very, very, very long time in bottle. I kept the opened bottle for almost one week and the wine didn't move one inch--no oxidation or any signs of fatigue. Having tasted many other vintages, including the also perfect 1919 (which is still going strong at age 97), I have no doubt we're talking about a white for the next 50 years. Looking at the older vintages, I might even be underestimating its life span. The potential next release could be the 1998 in no less than ten years' time.