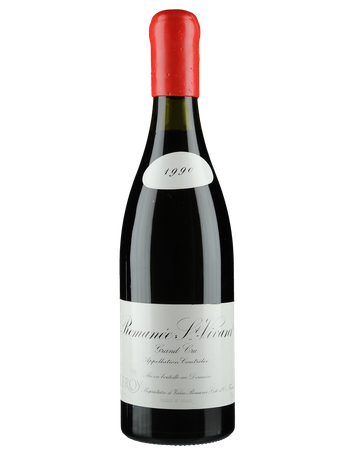 There are oenophiles who believe that Domaine Leroy produces the greatest wines in the world. The estate was founded in Burgundy in 1868 and today is owned and run by Lalou Bize-Leroy, a dynamo of a woman who represents the current generation of the founding family. Bize-Leroy is famous, among other reasons, for being an early adopter of biodynamic vineyard cultivation, meaning that there have been no chemicals, fertilizers or pesticides of any kind used in the Domaine Leroy production for many decades. The domaine, located in Vosne-Romanee, makes numerous wines, but is renowned for its Grand Crus and Premier Crus. Its Grand Crus are Corton-Charlemagne, Corton-Renardes, Richebourg, Romanee-St.-Vivant, Clos de Vougeot, Musigny, Clos de la Roche, Latricieres-Chambertin and Chambertin. The domaine has a total vineyard area of 56 acres which is planted in Pinot Noir, Chardonnay and Aligote. Production is extremely limited, usually between 10,000 to 20,000 bottles.

WS98: One of the great wines of the vintage--you'll think it's from another planet. Decadent stuff, this red Burgundy is full-bodied, ripe and sweet-tasting, with savage earth, petrol, tar, cassis, mocha, chocolate and coffee flavors.

RP95: Dark berries and fresh herbs are found in its tightly-wound aromatics. It is medium-to-full-bodied, massively concentrated, and has exemplary depth of dark, roasted black fruits.

Sign up to receive limited offers and new discoveries