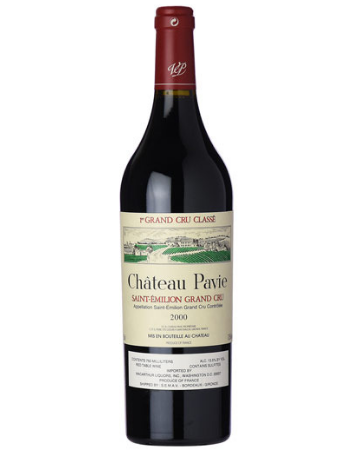 WA100: "Give Gerard Perse credit. People thought his numerous assurances that 2000 was the greatest Pavie ever produced were premature as well as arrogant. However, after tasting this extraordinary blend of 60% Merlot, 30% Cabernet Franc, and 10% Cabernet Sauvignon (made from low yields of 28-30 hectoliters per hectare) six separate times in 2003, it is unquestionably one of the most monumental wines Bordeaux has ever produced. Bottled in March, 2003, about nine months later than other 2000s, the color is an opaque purple, and the bouquet offers up notes of liquid minerals, blackberries, cherries, and cassis intermixed with spice box, cedar, and white flowers. On the palate, it exhibits a massive display of richness and extract, yet with pinpoint delineation and vibrancy as well as a 60+ second finish, this is the kind of phenomenal wine that Perse's critics were afraid he might produce - a no-compromise, immortal wonder that represents the essence of one of Bordeaux's greatest terroirs. Life is too short not to own and consume the 2000 Pavie. Anticipated maturity: 2012-2050." - Wine Advocate

JD100: Showing some maturity, the 2000 Pavie is about as sexy and opulent as Bordeaux gets. Blackcurrants, blackberries, toasted spice, truffle, and awesome minerality all emerge from this behemoth of a wine. From a magical terroir of steep limestone slopes and made from 60% Merlot, 30% Cabernet Franc and the rest Cabernet Sauvignon, it offers incredible depth and richness, yet stays elegant, light on its feet, and graceful. It’s an extraordinary, singular wine.

WS97: Beautiful and on point now, with a cascade of gently steeped blackberry, boysenberry and raspberry fruit flavors that are showing some secondary notes, all followed by singed alder, dried anise, tobacco and black tea accents. Features a mineral lining on the finish, along with a long sanguine echo. Presents a mature edge, but this is racy and fresh, with hints of menthol and bay leaf.