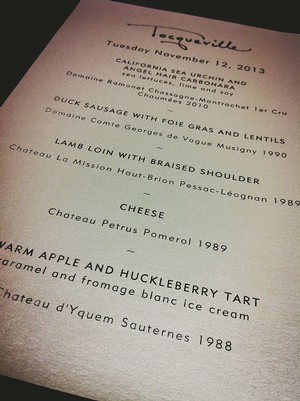 When in New York City, I often organize wine dinners at Tocqueville. A fixture in Union Square, Tocqueville remains one of New York's most acclaimed restaurants, along with its Michelin-starred sister, 15 East, just a few doors down. I can't say enought about the hospitality here, led by master Sommelier Roger Dagorn, who assists me with all of our wine pairings and often helps to create a tasting menu around the special wines we are opening. My last visit was a night of wine legends with friends and colleagues. Here are some of the highlights.

I was blown away by the 1990 Comte de Vogüe Musigny, which may have been the biggest powerhouse red Burgundy I have ever tasted. Explosive doesn't do this justice, yet the wine also possessed an elegance that is difficult to describe. Musigny is often described as an iron fist in a velvet glove, and that is on target with this bottle. Comte de Vogüe produces some of the most iconic wines in Burgundy, with history tracing back to 1450. Today the estate is led by its 20th generation. The Musigny vineyard, planted on iron and limestone soils, within the village of Chambolle-Musigny, is among the finest Pinot Noir sites in the world, and it showed here. Tocqueville's duck sausage with foie gras was ethereal, presenting the perfect complement to both the power and grace of this wine. Roger hit a home run with this pairing!

The most fun we had at the table was comparing 1989 La Mission Haut-Brion with Pétrus from the same year. Both wines received strong praise and 100 point ratings from RP, and both wines threw me for a loop. I was expecting power and fruit from La Mission, and didn't really get much of either. Instead, it was Pétrus that took over from the start, showing more fruit and body than La Mission, the latter coming acorss as surprisingly under-ripe. As for the Pétrus, who says Merlot is all about finesse? At 100% Merlot, this proves otherwise.

The menu at the right shows us starting with a bottle of Ramonet C-M from 2010, but we made a last minute swap in favor of Domaine Leflaive Batard-Montrachet 2010. As much as I enjoy Ramonet, we traded up here. This is a masterpiece that I would like to revisit in five years. It has so much going on, but the aromas and nuances aren't really developed yet. Still, it comes across as so elegant and long even today. The dish, sea urchin and angel hair carbonara, was another home run. Roger chose the fish for its briny texture, and that really helped to bring out different textures in the wine.

This was a pretty special evening, and all I could do the next morning was stay put at the Andaz Fifth Avenue, which I often call home while in New York. The lobby lounge serves coffee and is a great place to get some work done. I wasn't up for much more than that after a long night at Tocqueville.

Commenting has been turned off.