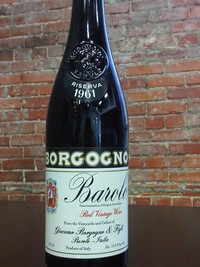 Thanks to the generosity of a good friend who always shares his best wine, I recently had the pleasure of enjoying a stunning bottle of Borgogno Barolo Riserva 1961.  I thought it would be a nice opportunity to share some thoughts about the wine, and about old wine in general, and hopefully this will be the first of many posts around the idea of tasting history.

There is something about tasting an old wine - the way it often develops in the glass, revealing new layers with the almost magical addition of air, can be stunning.  In my view, experiencing the alchemy of aged wine is the ultimate sensory experience for a wine lover.

It is also like tasting history. Opening an old bottle is like waking something up from the dead and transporting it from another era into a new existence.  Likewise, it can take us back to another time.  I always like to think about a place in history when I drink an old wine, and suggest doing a bit of homework before you pop the cork, to get a sense of what was going on in the world when the grapes were actually harvested (probably by hand).  You don't need to dust off your 10th grade history book though.  Go to Wikipedia, type a year into the box, and you'll be amazed at what you can learn in just a few minutes.

Before opening the '61 Barolo, I learned that this was the year that Roger Maris hit 61 home runs for the Yankees, breaking Babe Ruth's single-season record set in 1927.  I was reminded that JFK was inaugurated, and shortly thereafter took responsibilty for a failed Bay of Pigs invasion in Cuba.  Judy Garland performed a legendary concert at Carnegie Hall, and West Side Story was released on the silver screen.  In Italy, 15 people were killed at the F1 Italian Grand Prix after a Ferrari driver crashed into the stands.  JFK said we'd put a man on the moon before the end of the decade, and Princess Diana and Wayne Gretzky were born.

Having some reference points before opening a bottle like this helps to put the wine in perspective, and regardless of what it tastes like, commands an appreciation for drinking something that has been corked up for that long.  On this occasion, the wine just happened to be incredible.

1961 was an outstanding vintage in Italy, and is generally considered the vintage of that decade (with due respect to 1967).  It produced typically full-bodied and rich reds from both Piedmont and Tuscany, and the Barolo in particular can be very long-lived.  This Borgogno possessed all the hallmarks of the great vintage, showing a deep red and brown color, layers of dried red fruit and firm tannins.  It showed incredible balance, and had the fruit and acidity to last another couple of decades.  This was the best old Barolo I've ever had.  But regardless of the wine's character, it was a unique experience to taste and talk about a place in history as if we could connect with it in some way.  The next time you have an opportunity to open something from a different time, slow yourself down and try to take yourself there!

Note: Wine Record posts are Eric Genau's reflections and tasting notes on food, wine and conversation enjoyed with friends and family. This is the only place you will see Eric formally "score" a wine. As with all scores, they are meant as a guide to help readers discover new wines that suit their own palates. Readers may find they have a similar palate to Eric's, or not at all, but hopefully these notes and scores provide some valuable guidance in any event. Likewise, drinking windows are provided only as a guide, and based solely (unless otherwise indicated) on a single bottle and singular experience.

Rob Kohout
@ May 27, 2011 at 8:38 PM
Good call Eric, I was recently at the winery and also had a bottle of 61 myself. It was incredible. Also, vintages of note were the 71,75, and 82. I was allowed to taste a 61 original and a recorked 61. You wouldnt believe how different they were. Both Fantastic of course. Its really cool that every vintage Borgogno has ever made is still available to purchase.

Eric Genau
@ May 31, 2011 at 11:01 AM
http://www.citywinemerchant.com
Thanks, Rob. The bottle we opened was actually decanted and recorked in July 2007. Even with that considered, it was remarkably fresh and young. It's great that Borgogno is one of a small handful of producers that have regular library releases. I've enjoyed a number of older Borgogno bottles, but none better than this one!

allanm
@ Mar 7, 2014 at 7:32 AM
http://egaragedoorrollers.com/garage-door-accessories/
Hello webmaster good day. Superb post. You have gained a new fan. Please keep up the good work and I look forward to more of your great posts.
Commenting has been turned off.